Sinews in the Cypress: Our Year in Review 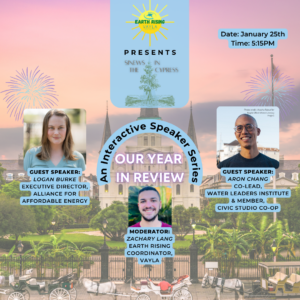 In this installment of Sinews in the Cypress, we explore the environmental rollercoaster of a year that was 2021 in New Orleans. We will be joined by Logan Burke, the Executive Director of the Alliance for Affordable Energy, and Aron Chang, an urban designer, co-lead at the Water Leaders Institute, and member of the Civic Studio Cooperative. Logan Burke brings expertise in energy policy and is a leader in many different types of environmental advocacy occurring in the city and region. Aron Chang is at the forefront of water policy, with a particular focus on living with water, and he brings a technical and creative expertise that few can match. Both of our esteemed guest speakers are deeply knowledgeable and involved in environmental work — we are so honored to have them join us in exploring some of the year’s trials and tribulations through their perspectives. The event will be moderated by our Earth Rising Coordinator, Zachary Lang.

We hope to highlight some of the most important environmental work that is going on in the region and discuss possible areas for our community to stay involved.

We hope to see you there!